We are delighted to welcome Sue Barnard today. Sue was born in North Wales but has spent most of her life in and around Manchester. After graduating from Durham University, where she studied French and Italian, Sue got married then had a variety of office jobs before becoming a full-time parent. If she had her way, the phrase “non-working mother” would be banned from the English language.

Since then she has had a series of part-time jobs, including some work as a freelance copywriter. In parallel with this she took several courses in Creative Writing. Her writing achievements include winning the Writing Magazine New Subscribers Poetry Competition for 2013. She is also very interested in Family History. Her own background is stranger than fiction; she’d write a book about it if she thought anybody would believe her.

In case you haven’t read The Ghostly Father, it’s based on Shakespeare’s Romeo & Juliet, told from the point of view of the character of Friar Lawrence (called Fra’ Lorenzo in this version). In fact all the characters are given the Italian versions of their names – hence “Giulietta” rather than Juliet.

The scene Sue has given us, which is pivotal to the story, is set in the vault, whilst Giulietta is still in her death-like trance. This is where, in the original tale, the lovers fall victim to a maddeningly preventable double-suicide. But in The Ghostly Father, events take a slightly different turn…

I have no idea how long I had been sitting there, desperately trying to ignore my cold, dark and dank surroundings, when I suddenly became aware of the noise of footsteps. I held my breath and listened. The footsteps grew louder; I realised that their owner must be coming down the steps into the vault. But concealed as I was behind Giulietta’s bier, I remained out of sight of the entrance, and the shaded light of my own flambard was wholly eclipsed by the light of another one, which was now being borne into the depths of the tomb.

Whoever this intruder might be, and whatever business he might have here, I prayed: Please may he go before the lady revives. Otherwise, what he sees will require no end of explanation. And neither she nor I would wish to be the one who would have to give it.

The footsteps came ever closer, eventually coming to a halt at the other side of Giulietta’s bier. There was a moment’s silence, then I was aware that the muslin sheet which had covered her body was slowly being pulled aside.

The intruder let out a low groan, then a stifled sob, before brokenly murmuring, “Giulietta! My love! My wife!”

I recognised the voice almost before the words had been uttered.

I lifted up my flambard and slowly eased myself to my feet. A ghastly sight met my eyes: young Romeo, his body racking with sobs, was clinging desperately to Giulietta’s body, his streaming face buried in the folds of her white wedding dress. So absorbed was he in his prostrate grief for his lost love that he was clearly utterly unaware that I was now standing at his side.

I was so taken aback at his arrival that it took some moments for me to ask myself: What in Heaven’s name was he doing here?

I received the answer to that question in the next instant. The broken-hearted boy was reaching into his pouch and pulling out a small glass vial. 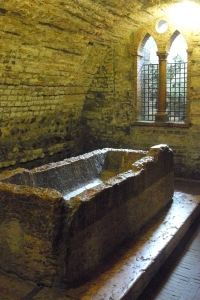 Oh merciful Heaven, I thought, as I recalled Giulietta’s words: “I have no doubt that he would wish to follow me to the grave…”

I had no time to wonder what had happened to bring him hither in this desperate state; I knew only that I had but seconds to prevent a true catastrophe…

Here’s the book blurb, as it appears on Amazon and on the back cover of the paperback edition:

Romeo & Juliet – was this what really happened? When Juliet Roberts is asked to make sense of an ancient Italian manuscript, she little suspects that she will find herself propelled into the midst of one of the greatest love stories of all time. But this is only the beginning. As more hidden secrets come to light, Juliet discovers that the tragic tale of her famous namesake might have had a very different outcome… A favourite classic story with a major new twist.

Sue has a mind which is sufficiently warped as to be capable of compiling questions for BBC Radio 4’s fiendishly difficult Round Britain Quiz. This once caused one of her sons to describe her as “professionally weird.” The label has stuck.

She joined the editorial team of Crooked Cat Publishing in 2013. Her first novel, The Ghostly Father (a new take on the traditional story of Romeo & Juliet) was officially released on St Valentine’s Day 2014. This was followed in July 2014 by her second novel, a romantic mystery entitled Nice Girls Don’t. Her third novel, The Unkindest Cut of All (a murder mystery set in a theatre), was released in June 2015.

Sue is also an Editor at Crooked Cat Publishing

One thought on “A Warm Welcome to Author Sue Barnard”