WOOHOO! On my blog today is the talented Rachael Amphlett and her new book, out now, The Friend Who Lied. You only need to take a look at the cover to know you want to read it!

The Friend Who Lied is described as a twisted psychological thriller from USA Today bestseller Rachel Amphlett – perfect for fans of The Hunting Party by Lucy Foley and Friend Request by Laura Marshall. 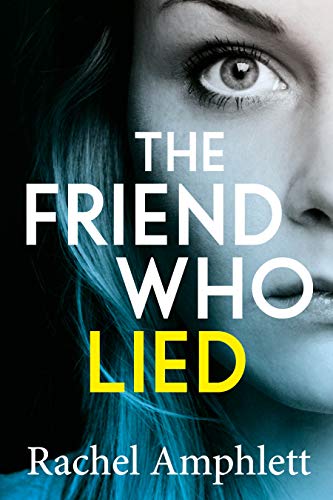 Lisa Ashton receives a last-minute reprieve from death two weeks before her birthday. Regaining consciousness, she is horrified to learn one of her friends has been killed –and saved her life.

As she recovers, she uncovers a trail of carefully guarded reputations, disturbing rumours, and lies. Soon, Lisa begins to wonder if one of her friends is hiding a terrible secret.

Because five of them entered the escape room that day, and only four got out alive.

And someone is determined to cover their tracks before she can find out the truth.

Can Lisa find the killer before someone else dies?

The Friend Who Lied: a twisted psychological thriller from USA Today bestseller Rachel Amphlett – perfect for fans of The Hunting Party by Lucy Foley and Friend Request by Laura Marshall.

What a tangled web of intrigue Rachel Amphlett has created. This is a book about terrible secrets that can thrive in the most intimate of relationships, and deftly tackles unreliable narrators. It’s not often that I devour a work of fiction, buttressed with great writing, but I was catapulted into the first 16 chapters before I realised what page I was on.

Disorientated and anxious Lisa Ashton, wakes up in hospital after having an operation. Devastated to learn of Simon Granger’s death, she has no recollection of what happened, even though scattered memories of him resurface from time to time. We know she saw him during the A-Maze Escape Room game where she went with her friends on her birthday. But what we don’t know is how he died. From strained police interviews to the tragic aftermath of an attempted suicide, it’s clear someone has something to hide.

Hayley is one of the most intriguing characters for me. Stifling a yawn at almost everything life seems to throw at her. She struggles with emotion, shutting herself away because that’s the only way she knows how. Her chapters for me had an irresistible voice, and I looked forward to reading them.

Since being discharged after the transplant, Lisa soon realises her life-saving operation has made local news, attracting the attention of a journalist. But so too has Simon’s death. As the police probe deeper and CCTV evidence comes to light from the Ragamuffin Bar, someone’s dark secrets are about to be exposed.

The writing is easy to follow and puts you right at the scene. With cleverly constructed chapter points of view, it’s easy to get a picture of each character and learn what makes them tick. But it’s not easy to work out who or what went horribly wrong.

For me the ending was a surprise, revealing a few twists along the way. Wickedly clever, ingeniously plotted, author Rachel Amphlett has an excellent grasp of human nature and knows how deliver a big punch. Five fat stars from me!

Before turning to writing, USA Today bestselling author Rachel Amphlett played guitar in bands, worked as a TV and film extra, dabbled in radio as a presenter and freelance producer for the BBC, and worked in publishing as a sub-editor and editorial assistant.

She now wields a pen instead of a plectrum and writes crime fiction and spy novels, including the Dan Taylor and English Spy Mysteries espionage novels and the Detective Kay Hunter British police procedural series.

She’s a member of International Thriller Writers and the Crime Writers Association, with the Italian foreign rights for her debut novel, White Gold sold to Fanucci Editore’s TIMECrime imprint, and the first four books in the Dan Taylor espionage series contracted to Germany’s Luzifer Verlag.

“Thrilling start to a new series. Scared to Death is a stylish, smart and gripping crime thriller” ~ Robert Bryndza, USA Today bestselling author of The Girl in the Ice