If you want to curl up with a brilliant thriller, this is it.  I will Make You Pay by Teresa Driscoll is both harrowing as it is frightening.  For Driscoll fans who enjoyed I Am Watching You, this new offering will bring the same powerful plot line with rich characters and unexpected twists. The author switches points of view with each chapter, leaving the reader excited for more. 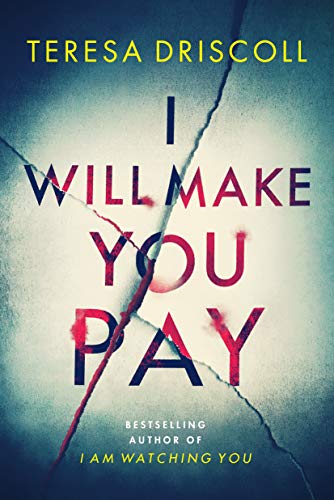 It seems like an ordinary Wednesday, until the phone rings. A mysterious caller with a chilling threat. Journalist Alice Henderson hangs up, ready to dismiss it as a hoax against the newspaper. But the next Wednesday, the stalker makes another move—and it becomes clear that this is all about Alice.

Someone wants her to suffer, but for what? Her articles have made her a popular local champion—could it be her past rather than her work that’s put her life in danger? Alice is determined not to give in to fear, but with the police investigation at a dead end, her boyfriend insists on hiring private investigator Matthew Hill.

With every passing Wednesday the warnings escalate, until it’s not only Alice but also her family in the stalker’s sights. As her tormentor closes in, can Alice uncover what she’s being punished for before the terrifying threats become an unthinkable reality?

One word: wow! This latest book from Teresa Driscoll weaves a fascinating plot with an emotional depth that leaves you gasping. What begins as a story about journalist Alice Henderson, morphs into a gripping, disturbing and fascinating tale, not just about who is calling her at work through voice change software to distort his voice but about Alice herself. I kept asking myself if this stalker was someone who didn’t warm to a story she wrote. Or is it someone she might have mistakenly overlooked in her past.

Alices changes all her social media passwords and makes an appointment with a security company to check her flat. Statements have been taken not only at work but also with the local coffee shop — a place she regularly frequents. Driscoll ratchets up the tension here and you can’t help wondering if Alice will be snatched away in broad daylight. You’d think Alice has done everything she can to protect herself, but is there something she might have missed? A small loophole perhaps that this ardent stalker will cleverly slip through. And what is the significance of Wednesday?

Tom, Alice’s boyfriend hires a private investigator called Matthew Hill to cover Alice. But Matthew does a little investigation of his own and realizes there is more to Alice than meets the eye. Chapters alternate between past and present, and the “Him-before” chapters are both disturbing and heartbreaking. A little boy – we don’t know who at this stage – who loves his gran, Martha. Martha’s struggles are all too real and her grandson whom she calls ‘My beloved little soldier’ witnesses her suffering through his time. She tells him she will never move from her home because of the bench and the memories that go with it.

Driscoll demonstrates over and over again that she has what it takes to shock, surprise and move her readers. I couldn’t help empathizing with a child left on his own and a caregiver strained to the limits to carve out a life for herself and the boy. I couldn’t help wondering what would happen to Brian. Will this child, who has suffered so much, eventually play out his ‘delicious dreams’ in order to feel alive? These chapters sucked me in so completely, I forgot to drink the pot of coffee I’d made in the morning!

Alice, her campaign, the housing block and the local paper, all come full circle in a frightening denouement I didn’t see coming. All I can say is Driscoll teases out this twisty plot at the perfect pace, introducing multi-layered characters that even the sharpest readers won’t predict what’s coming.

Teresa Driscoll – a former BBC TV news presenter – is now a million-copy #1 bestselling author. Her debut psychological suspense I AM WATCHING YOU hit Kindle #1 in the UK, USA and Australia and has also been number #1 in Italy in translation. Her second thriller THE FRIEND again made the #1 top spot in the UK and Australia while THE PROMISE hit #2.

Teresa’s work has been sold for translation to 20 countries and optioned for film. She also writes women’s fiction; RECIPES FOR MELISSA was auctioned at the Frankfurt book fair between seven German publishers and her second women’s fiction title is LAST KISS GOODNIGHT.

During her long career as a journalist, Teresa worked for newspapers, magazines and television, including 15 years presenting the BBC TV news programme Spotlight. Covering crime for so long, she was deeply moved by the haunting impact on the relatives, the friends and the witnesses and it is those ripples she explores now in her darker fiction.

Teresa lives in glorious Devon with her family and blogs regularly about her “writing life” at her website – http://www.teresadriscoll.com.

Other books by Teresa Driscoll