A BIG Happy Publication day to Robert Bryndza! I was absolutely thrilled to receive a copy of Nine Elms by Robert Bryndza and to finally meet Kate Marshall in this brand-new crime series.  The novel is published in eBook and audio today AND I understand there is a glorious shiny hardback coming in January! Woohoo! 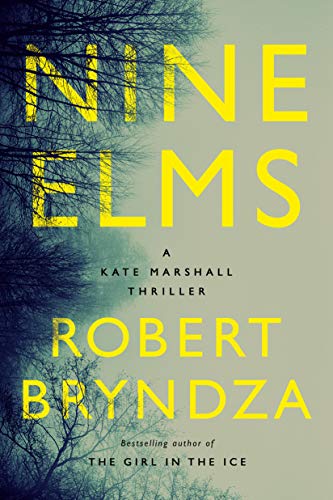 From the breakthrough international bestselling author of The Girl in the Ice, a breathtaking, page-turning novel about a disgraced female detective’s fight for redemption. And survival…

Kate Marshall was a promising young police detective when she caught the notorious Nine Elms serial killer. But her greatest victory suddenly turned into a nightmare. Traumatized, betrayed, and publicly vilified for the shocking circumstances surrounding the cannibal murder case, Kate could only watch as her career ended in scandal.

Fifteen years after those catastrophic events, Kate is still haunted by the unquiet ghosts of her troubled past. Now a lecturer at a small coastal English university, she finally has a chance to face them. A copycat killer has taken up the Nine Elms mantle, continuing the ghastly work of his idol.

Enlisting her brilliant research assistant, Tristan Harper, Kate draws on her prodigious and long-neglected skills as an investigator to catch a new monster. Success promises redemption, but there’s much more on the line: Kate was the original killer’s intended fifth victim…and his successor means to finish the job.

WOOHOO! Another Bryndza book I couldn’t refuse. Only this time a new detective and a new series published by Thomas & Mercer.

Peter Conway is never far from Kate’s mind. During the aftermath of the most heinous crimes imaginable, she fumbles with a new life while at the same time regretting the day she stopped being Detective Constable Kate Marshall. Nine Elms Lane has changed since the 1990s with new developments going up and things aren’t the same any more. With a career in law enforcement lost to reputation and now living in Thurlow Bay on the south coast of England, she is a lecturer in Criminology at Ashdean University. Starting with the course “Criminal Icons,” Kate describes her relationship with Met Police Detective Peter Conway and the victims whose lives he took. There must be nothing worse than thinking about a murderer who has haunted her entire career. But when she receives an email from Malcolm Murray about their daughter Caitlyn who went missing in 1990 and may have been dating a police officer, all hell breaks loose.

As Nine Elms unfolds with a cutthroat ferocity, Conway receives a letter in prison and it’s this that made me shiver. I suspected the sender was someone in awe of the crime and it’s perpetrator, but I didn’t expect the crimes to be so horrendous. It reminded me of Alcatraz where prisoner Frank Morris led a minimalist existence inside, it surprised me how he was able to conjure up such a well-hatched, meticulous escape plan. With Bryndza’s descriptive prose, it’s easy to visualize Conway’s conditions, his routine and his jailers.

You’ll get a kick out of the Kate’s research assistant, Tristin, a young man with which every reader will resonate. Snowy white socks and an enquiring mind, reminiscent of a young Inspector Lewis. But when DCI Varia Campbell and DI John Mercy reveal a past misdemeanour, I liked Tristin a little more. Bryndza is skilled at drilling down to the smallest of foibles, which in turn brings an extra dimension to his characters.

I was convinced that Kate’s relationship with Peter Conway and his desire to see Jake would somehow play out in prison. That he would find a way to lure them there. But the backdrop of CM Logistics and an eerily staged scene from the past was a twist I never saw coming.

This is an ultra-satisfying, seat-of-your-pants police procedural and although I read it in three days — interrupted only by work — it was easy to pick up where I’d left off. The details of the case and the characters stayed in my mind and so did the surrounding story. The book is miraculously tied together in a violent and remarkably satisfying denouement.

Nine Elms is a sharp example of its genre. The pages turn, the violence is brutal, and for all police procedural and crime aficionados, fasten your safety belts because this is one hell of a twisty ride.

Many thanks to the Author, Netgalley and the Publisher for allowing me to read an advanced reader copy for an honest review.

What others are saying:

‘Twisty, dark and layered . . . A superb start to what promises to be another stand out series’  – M. W. CRAVEN

‘Gripping from start to finish. I will wait with bated breath for the next Kate Marshall thriller.’  – RACHEL ABBOTT

Bryndza’s characters are so vividly drawn – even the slightest character – and fully human and uniquely imperfect. His plots are clever and original and cool and his sense of timing is excruciatingly flawless. Nine Elms is Robert Bryndza spreading his already formidable wings to thrilling effect.  – Augusten Burroughs, author of RUNNING WITH SCISSORS)

A heart-pounding series launch from Bryndza . . . Readers will look forward to seeing more of the complex Kate (Publishers Weekly)

Hello, I’m Robert Bryndza, and thank you for visiting my Amazon Author page. I’m a crime writer and my books have sold 3 million copies, and they’ve been translated into 28 languages. I’m British and live in Slovakia. In addition to writing crime fiction, I have published a bestselling series of romantic comedy novels.

My new novel, Nine Elms, the first in my Kate Marshall private detective series has just been published.

If you click the yellow ‘follow’ button under my author photo, Amazon will send you an email when I have a new book release, or if there’s a special Amazon deal on my books that you might be interested in.