YAY! Orenda Books have done it again. Another scorcher from a brilliant author! I’ve not read anything by Louise Beech before and I’ve heard fabulous things about her books. This is one I had to read! 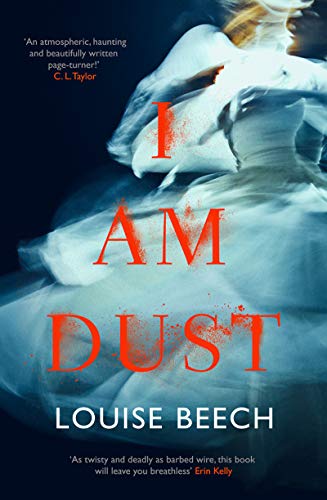 The Dean Wilson Theatre is believed to be haunted by a long-dead actress, singing her last song, waiting for her final cue, looking for her killer. Now Dust, the iconic musical, is returning after 20 years. But who will be brave enough to take on the role of ghostly goddess Esme Black, last played by Morgan Miller, who was murdered in her dressing room? Theatre usher Chloe Dee is caught up in the spectacle. As the new actors arrive, including an unexpected face from her past, everything changes. Are the eerie sounds and sightings backstage real or just her imagination? Is someone playing games? Is the role of Esme Black cursed? Could witchcraft be at the heart of the tragedy? And are dark deeds from Chloe’s past about to catch up with her? Not all the drama takes place onstage. Sometimes murder, magic, obsession and the biggest of betrayals are real life. When you’re in the theatre shadows, you see everything. And Chloe has been watching.

The Dean Wilson Theatre is haunted by the lead actress Morgan Miller, star of the hit musical ‘Dust’ who was found dead in her dressing room twenty years ago. When Dust returns for a second run, the lead part and the play is expected to be cursed. Eerie sounds, whispers, and the burning question of who will play the part of Esme Black now?

I AM DUST is written around a unique premise; a ghost story blended with urban fantasy. With two interchanging narratives, Chloe as a teenager in 2005—a period of time shrouded in mystery—and latterly an usher at the Dean Wilson Theatre in 2019. The theatre is a wonderful character; haunting, moody, a crime scene that still carries the exhilarating vibe of the golden days. You can smell burning lamps, musty costumes and greasepaint, and you can hear the indeterminate sound of arpeggios and scales as the orchestra warms up in the pit. The hush before the curtain rises… Very fitting that the author is herself an actor and familiar with the workings of a theatre, which undoubtedly conveys a huge degree of competence to the story and to the dialogue. Any reader will be in for a treat!

In 2005, while performing in an amateur production of Macbeth, Chloe, Jess and Ryan dabble in witchcraft. Even though the girls aren’t as curious in the occult, their infatuations get the better of them and they are persuaded to take part. This book tunnels into a dangerous place and investigates things most of us would steer clear of—but not so for the intrepid three. Conjuring a dormant heroine might seem the right thing to do but the ensuing mayhem may prove otherwise. Memories of a game she didn’t want to play and the pain of a love triangle come back to haunt her, and the past and present intertwine. Especially reminiscent of MacBeth and of Hecate and her two ghastly sisters; an ethereal trio of shadows that lurk in the wings. You can picture the scene: the most infamous of all cauldrons which could so easily be exchanged for a Ouija board.

After the actors have gone, Chloe imagines costumes on a hanger might come to life like the dolls in The Nutcracker. With interference on the radio and cold breath on the back of her neck, what spirits are being catapulted into the present and what messages do they bring? Chloe, no longer the carefree girl of her youth, is a broken woman carrying the scars of her past—a past she barely remembers or conscientiously has tried to forget. But she is brave and committed and is desperately trying to overcome any damage incurred along the way. This is the core of the mystery. That, and a murder which begs to be resolved at any cost.

An hypnotic unputdownable story, Beech does a perfect job of introducing us to likeable characters with honest observations to make it engaging and realistic. Then cranks up the tension to create a gripping and emotionally charged ending. Gave me a huge book hangover. So, definitely a MULTI star read from me!

Louise Beech remembers sitting in her father’s cross-legged lap while he tried to show her his guitar’s chords. He’s a musician. Her small fingers stumbled and gave up. She was three. His music sheets fascinated her – such strange language that translated into music. Her mother teaches languages, French and English, so her fluency with words fired Louise’s interest. She knew from being small that she wanted to write, to create, to make magic.

She loves all forms of writing. Her short stories have won the Glass Woman Prize, the Eric Hoffer Award for Prose, and the Aesthetica Creative Works competition, as well as shortlisting twice for the Bridport Prize and being published in a variety of UK magazines. Her first play, Afloat, was performed at Hull Truck Theatre in 2012. She also wrote a ten-year newspaper column for the Hull Daily Mail about being a parent, garnering love/hate criticism. Her debut novel was a Guardian Readers’ pick for 2015.

She is inspired by life, history, survival and love, and always has a story in her head. Her debut novel, How to be Brave, came from truth – when Louise’s daughter got Type 1 Diabetes she helped her cope by sharing her grandad’s real life sea survival story. Her second novel, The Mountain in my Shoe, will be released in September 2016 and was inspired by her time working with children in the care system.

When she was fifteen Louise bet her mother ten pounds she’d be published by the time she was thirty. She missed this self-set deadline by two months. Her mother is still waiting for the money.

Other Books by Louise Beech