Another exciting tale from a brilliant writer! A gripping read that explores the nature of evil and his relentless pursuit to stir the pot. While the small town of Hinton Hollow’s residents smolder with renewed passion, energy and vice, the story takes one twist after another until reality itself is called into question, and everything they knew about love and hope will change. 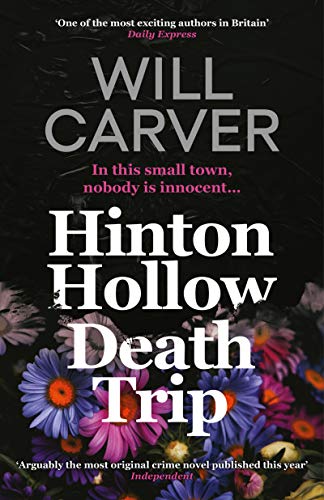 Five days in the history of a small rural town, visited and infected by darkness, are recounted by Evil itself. A stunning high-concept thriller from the bestselling author of Good Samaritansand Nothing Important Happened Today.

It’s a small story. A small town with small lives that you would never have heard about if none of this had happened.

Little Henry Wallace was eight years old and one hundred miles from home before anyone talked to him. His mother placed him on a train with a label around his neck, asking for him to be kept safe for a week, kept away from Hinton Hollow.

Because something was coming.

Narrated by Evil itself, Hinton Hollow Death Trip recounts five days in the history of this small rural town, when darkness paid a visit and infected its residents. A visit that made them act in unnatural ways. Prodding at their insecurities. Nudging at their secrets and desires. Coaxing out the malevolence suppressed within them. Showing their true selves.

Detective Sergeant Pace had returned to his childhood home. To escape the things he had done in the city. To go back to something simple. But he was not alone. Evil had a plan.

Hinton Hollow Death Trip follows Detective Sergeant Pace to his old stamping ground. He is hoping for peace. But peace is the last thing he is going to get. Something sinister follows him there, blowing in on an ill wind. And it’s here to stay.

This book, written from the perspective of Evil itself, is a dark, brooding tale that casts a malevolent pall around the residents of Hinton Hollow. A select group of people whose secrets are laid bare and whose lives are tossed into the air as if they were dice.

Evil is the game show host. He dishes out strife and turmoil at the drop of a hat. And he’s very good at it.

Little Henry Wallace, alone on the train, isn’t afraid. Like a good boy, he’s not to talk to anyone. The note around his neck says it all. Darren works in an abattoir but are his vile actions his own, or has evil whispered in his ear? Dorothy Reilly is eating her way to heart failure. It’s only a matter of time. The Hardings don’t interact, until Evil waves a hand. Why did Annie throw a brick through the florist window? The most frightening of these is the Brady family and the man with a gun.

DS Pace is apprehensive about returning to Hinton Hollow, and I don’t blame him. There’s a lot to greet him when he gets there. Will he return Maeve’s call? Or will she be permanently banished to voicemail? He can’t forget the people who jumped from Tower Bridge and he’s running with no idea Evil is right there with him, the invisible shadow behind him.

All the people who are affected by this blast of doom are somehow intertwined, from the flower arranger — who prepared the wreath for Oz’s father’s grave four years ago — to the unsuspecting Faith Brady where nothing important had happened that day. But it would, something so horrific and something you’d never imagine because Evil dances around them all.

To me this book has a Dekker-esque feel. I’m thinking of Showdown in his Paradise series and almost eerily reminiscent of Peretti’s This Present Darkness. Where it differs, is that Hinton Hollow Death Trip is psychological warfare rather than spiritual, and takes place in a secular, true-to-life setting. Strong, unforgettable characters and a carefully constructed plot make this the next HUGE bestseller in its genre. A wickedly smart page-turner that reveals the thin line between psychosis and insanity. It will keep you glued to its pages and guessing wrong until its breathless ending.

So many thanks to Karen Sullivan at Orenda Books, Will Carver and Anne Cater for allowing me the privilege of reading this book.

What other people are saying:

‘Carver as one of the most exciting authors in Britain. After this, he’ll have his own cult following’ Daily Express

‘Arguably the most original crime novel published this year’ Independent

‘At once fantastical and appallingly plausible; this mesmeric novel paints a thought-provoking if depressing picture of modern life’ Guardian

‘This book is most memorable for its unrepentant darkness’ Telegraph

‘Unlike anything else you’ll read this year’ Heat

Carver likes to work his body as much as his mind and runs his own fitness and nutrition company, though he prefers to talk about his writing more than how he consumes adequate protein as a vegan.

‘I was blown away by this gripping book. I sense Carver will break out of genre boundaries and become a literary voice to be reckoned with.’ —Sarah Pinborough

‘There is a vivid – almost cinematic – quality to the writing. It is intense and makes for uncomfortable yet compulsive reading.’ — News of the World